Heathrow airport has three underground stations connected to the London Underground network at the western branch of the Piccadilly Line.

The underground (the tube) is the cheapest, and in most cases, the most convenient way of travelling to central London.

There is no Piccadilly line from Acton Town to Heathrow on 1 & 2 October. A replacement bus service will run between Hammersmith & Heathrow airport. Allow longer for your journey. Alternatively, use the Elizabeth line train or National Express coach.

Underground stations are clearly signposted from the arrival hall of each terminal.

Heathrow Terminals 2 & 3 underground station is a 4 minute walk from Terminal 2.

Heathrow Terminals 2 &3 station is a 5 minute walk from Terminal 3. There are moving walkways for most of the route.

Terminal 4 has its own underground station.

Terminal 5 has its own underground station.

Daily passes including the underground from Heathrow

If you plan to travel into central London and use public transport for the rest of the day there are three options:

Pay as you go Oyster

If you don’t have a contactless card and don’t want an Oyster card, you can buy a One Day Travelcard. This is a paper ticket.

Trains leave for central London every 5–10 minutes. For the full timetable see the TfL website.

If your flight arrives too late to take the underground between Sunday evening and Thursday evening and don’t want to take a taxi, the night bus N9 runs through the night to central London. If you arrive late on Friday or Saturday, there’s the Night Tube.

There is a 24-hour service on the Piccadilly line on Friday night/Saturday morning and Saturday night/Sunday morning. It runs from Heathrow Terminals 1,2,3 and Terminal 5 underground stations.

There is no Night Tube from Terminal 4.

How long does it take from Heathrow to central London?

Use Transport for London’s journey planner to plan your journey. Deselect ‘National Rail’, otherwise results will include the more expensive Heathrow Express or Elizabeth line trains.

Or take a look at the underground map.

Or view other journey planner options

Heathrow to Victoria by underground

If you’re travelling to Victoria from Heathrow, you need to change from the Piccadilly line to the District line. With luggage, it’s easier to do this at Hammersmith rather than South Kensington station, which has escalators and stairs.

At Hammersmith, Piccadilly line trains stop at platform 3. Get off the train and walk to platform 4, literally a few steps to the other side of the same platform. From here take the District line to Victoria. The destination on the front of the train should say ‘Upminster’. 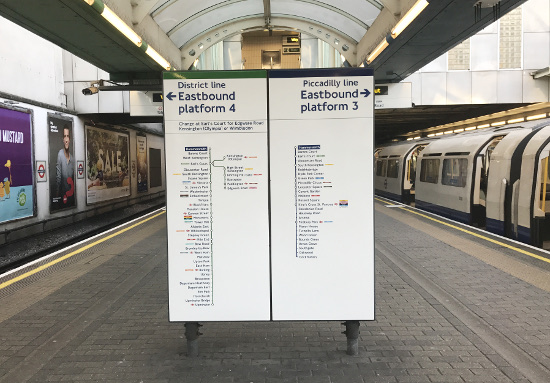 When to avoid the underground

The underground might be worth avoiding if you have mobility issues or a lot of luggage.

Most underground stations in central London have escalators and some have stairs, but not all have lifts. If you want to avoid using stairs, TfL produce a map of stations with lifts and escalators (pdf).

Arriving in central London during the rush hour

If you take the underground from Heathrow airport between 6.00am–7.45am or 4.30pm–5.45pm Monday–Friday, by the time you reach central London the trains and platforms will be crowded. It can be difficult getting off the train with a lot of luggage.

It’s not too bad with luggage that’s easily carried. With heavy bags or several suitcases, you might want to wait a while at the airport or consider the coach or the train instead.