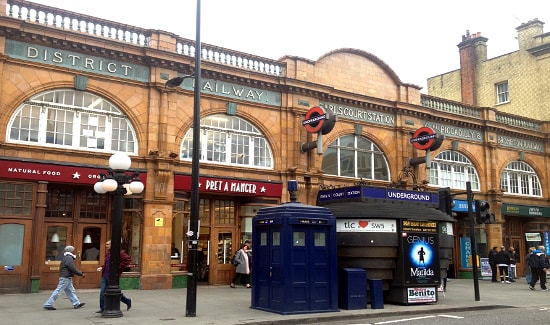 Earl’s Court, on the western fringes of central London, is generally considered the slightly poorer cousin of its posh neighbour, South Kensington. However, it’s a convenient area to stay with a good choice of budget accommodation.

It’s particularly suitable if you arrive at Heathrow airport. Earl’s Court underground station is on the Piccadilly line, a cheap and easy 35 minute tube journey from Heathrow.

Scroll to the bottom for a detailed map of the area.

The area developed after the construction of the Metropolitan District Railway in 1869 and most of the buildings date from the 1880’s. Between the 1960’s–1990’s it was a stopping point for backpackers, but with the sharp rise in property prices many bedsits and hostels were sold and are now hotels or upmarket flats.

The area has a mix of low to mid priced small hotels and budget chain hotels. Most are within walking distance of Earl’s Court tube station. The Ibis Earl’s Court and the Holiday Inn Express Earl’s Court, are actually in Fulham and closer to West Brompton station.

West Cromwell Rd is one of the major routes out of London and is always busy. Hotels on the side streets off the main road, Earl’s Court Rd, are relatively quiet at night.

Book a hotel in Earl’s Court

Although it’s easy to travel anywhere in central London by tube from Earl’s Court, the following places of interest are within walking distance.

The V&A, Natural History museum and Science Museum; three of London’s best museums are a 15 minute walk from Earl’s Court.

Lovely Holland Park has an children’s play area, woodland and a peaceful Japanese garden. Keep an eye out for the peacocks.

One the oldest garden cemeteries in the country. Beatrix Potter, a local resident, apparently named some characters after some of the deceased. Emmeline Pankhurst is buried here.

Earl’s Court Rd, just outside the tube station has a mixture of coffee shops, banks, chain restaurants, launderettes, supermarkets and chemists. All the basics really. The Oxfam charity shop on Earl’s Court Rd usually has a good selection of books.

For clothes, shoes or household goods, Kensington High St (10-15 minute walk, one stop on the tube or bus 328 from Warwick Rd) is the closest shopping area. Westfield London, a huge shopping centre, is 20-30 minutes on the bus (C1 from Warwick Rd).

It’s easy to travel to other shopping areas by underground. Take the Piccadilly line to Knightsbridge (for Harrods), Piccadilly Circus (for Regent St) or Covent Garden.

There are three small supermarkets on Earl’s Court Rd; Co-Op, Sainsbury’s Local and the pricier M&S Simply Food. The Tesco superstore north of West Cromwell Rd is one of the largest supermarkets in central London.

If you need a UK SIM card, there’s a Carphone Warehouse branch at 153 Earl’s Court Rd.

Earl’s Court underground station is on the Piccadilly and District line.

From Gatwick
Take a train from Gatwick to Victoria station, then the underground from Victoria to Earl’s Court (District line).

Or, if you’re comfortable changing trains, take a train from Gatwick to Clapham Junction then change for a train to West Brompton. You could then walk to your destination or take the underground (District line) one stop to Earl’s Court.