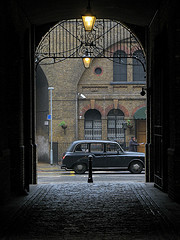 An alternative way of seeing the sights of London is to take a black cab (a traditional London taxi).

It’s not something that a budget traveller would think of doing, as taxis are the most expensive way to travel around London. But for approximately £23–£28 for a 40 minute journey (about 6 miles), it’s a cost-effective option especially if you’re in a group of 4 or 5.

London taxis drivers are pretty reliable and are regularly voted the best in the world. Before getting a licence they have to memorise at least 320 routes in London as well as all the major landmarks and places of interest along the way. So don’t be afraid to ask questions – they might not be able to give you the full history but they’ll at least be able to tell you what you’re looking at.

It’s not advisable to do this with a minicab (private hire vehicle) – they don’t have to complete such extensive training and probably won’t have the same depth of knowledge.

Best times to do a taxi tour

Probably mid-morning or between 1pm-3pm. Avoid anytime before 9.30am and between 4–7pm; you don’t want to be stuck in traffic during the rush hour. Also bear in mind that prices increase after 8pm and then again from 10pm-6am. It’s also slightly cheaper to do this Monday-Friday; fares are slightly higher at the weekend. See the official guide to taxis fares for more detailed information.

Start somewhere in central London and ask the driver to take you past the major sights in Westminster and the City of London. Keep an eye on the meter, if it goes above your budget just ask the driver to pull over.