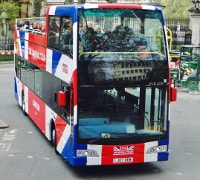 The Original Tour is London’s longest established sightseeing tour. They operate three separate tour routes and a tour ticket is valid on all routes. You can either stay on the bus and do a complete tour or you can use the buses to hop on and hop off at one of the 80 stops along their tour routes. Your ticket allows you to do both if you want.

Coronavirus/Covid: London is now in Lockdown. The Original Tour has been suspended until further notice.

The yellow route is the ‘Original Tour’ with live commentary from an English speaking guide. If you stay on the bus the tour lasts 2 hours 15 minutes.

The red route follows most of the same route as the yellow route, but also goes via Madame Tussauds. This route has recorded commentary. If you stay on the bus the tour lasts 2 hours 15 minutes.

The Blue Route: The Museum Tour

This route connects the museums in Bloomsbury including the British Museum with the South Kensington museums (V&A, Science Museum & Natural History Museum) and goes via some of London’s major shopping streets. It has recorded commentary. Tour lasts 2 hours 15 minutes.

Tours depart every 5-15 minutes from 8.30am to 8pm daily. The final Yellow Route bus departs from Coventry St, near Piccadilly Circus at 8pm. Timetables are available on their website.

You can join the tour at any of the 80 stops along the route. However, the Original Tour recommend you start the tour at one of their main departure points: Piccadilly Circus, Trafalgar Square, Russell Square, Victoria, Marble Arch.

Tickets are cheaper if you book online.

Tickets booked online can be used on any day up to 6 months from the date of booking. They can be printed at home or you can collect them from the Original London Visitor Centre on Cockspur St near Trafalgar Square. Tickets can be sent to your home address for an additional fee.

The following extras are included in the ticket price. The walking tours and the river boat trip must be taken during the validity of the ticket

On Tuesday, Thursday & Saturday you see Changing the Guard at Horse Guards parade and then visit Buckingham Palace.

Changing the Guard and the Rock’n’Roll walk depart from The Original London Visitor Centre at 17-19 Cockspur St, just off Trafalgar Square.

The Jack the Ripper walks starts from The Original Tour stop at the Tower of London on Tower Hill. Walks last approximately 90 minutes.